hi everyone,
it is being a while because the controller works fine on the raspberry pi , but now i need some help with the shell execute command .

I want to run a python script that starts a radio player ,mpc called, on the raspberry pi, running the python script through the shell script works when i call it from the command line with < ./run_radioPlayer.sh > .

The path i have given is the following < /home/pi/scripts/run_radioPlayer.sh > 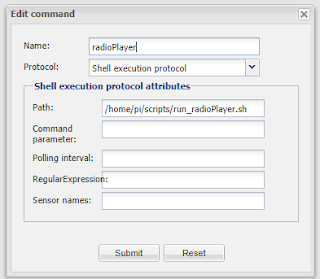 I had a nasty issue with a bunch of command line commands last week when I was setting up a new machine.

It turned out that I needed to fine tune the exact paths.

I discovered the failed attempts are listed in one of the logs.

Have a hunt around and see what your log files are reporting.

I don't know if I was doing something wrong, but sometimes even if I tweaked the command on the designer and resynchronized, the same error would appear, even when the controller.xml file had the correction.

Only a reboot seemed to do the trick.

I hope that helps you.

Yes I have seen the same behavior- reboot of the controller seems to fix the paths in the controler.

Synchronizating the online designer with controller sometimes seems to break the command line paths that I have set up for playing audio files as notifications for certain events.

Yes, rebooting did the job.